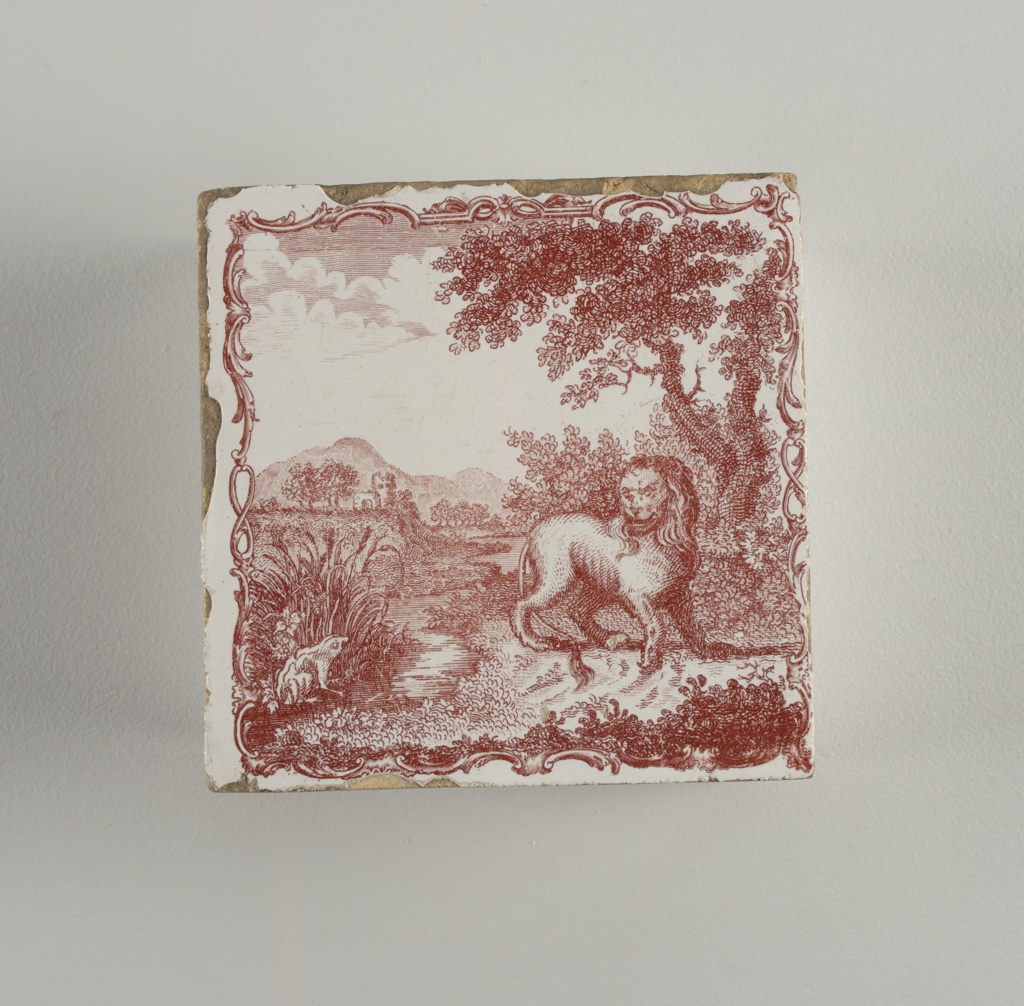 Imagine it is Georgian England and you are curled up in front of the fireplace after a long day of damp English weather. Nearby, a family member reads out loud from a recently printed book of fables by the ancient Greek story teller Aesop:

“The lion, hearing an eerie voice but seeing nobody, started with fright. He listened closely and when the voice came again, the lion trembled with fear and was paralyzed. At last, a frog crawled out of the lake. The lion, realizing that the noise he had heard was nothing but the croaking of a small and harmless creature, tore the frog to pieces out of anger and contempt. The moral is: unsubstantiated fear is crippling; all passions should be subjected to reason. “[1]

While listening to the story, you study the fireplace surround, which is decorated with a series of ceramic tiles printed with illustrations of Aesop’s moralizing tales…

The technique of printing on ceramic tiles was derived from the established practice of printing on paper. Consequently, images on eighteenth-century ceramics were often poached from published books. The image of the lion and the frog on this Cooper-Hewitt tile was copied after an engraving by Elisha Kirkall in Dr. Samuel Croxall’s Fables of Aesop and Others, first published in 1722 in London by Tonson and Watts. (fig. 1)  During the late seventeenth and early eighteenth centuries, rising literacy rates contributed to an explosion of interest in ancient fables.

In 1756, the Liverpudlians John Sadler and Guy Green filed for a patent for the process of printing on tiles, claiming that within six hours, they could print upwards of twelve hundred earthenware tiles with various patterns more neatly than one hundred skilled painters. To create a transfer print, designs were hand etched onto copper plates, which were then covered with an oil-based pigment. The image was transferred onto thick tissue paper using a printing press. The paper could then be positioned onto a tile (or other ceramic form) and fired in a kiln.

This process revolutionized ceramic decoration. Previously, objects were painted by hand, a task which was not only laborious but expensive for factory owners; talented factory decorators were highly paid for their artistic work. Transfer printing allowed for a high quality image while cutting production costs and massively increasing productivity. The use of transfer printing was part of a broader trend of industrialization and standardization in ceramic production during the eighteenth century.

Figure 1. Elisha Kirkall, Fable 82, The Lion and the Frog. Reproduced from Aesop, and Samuel Croxall. Fables of Aesop and Others: Translated into English by Samuel Croxall, the Tenth Edition, Carefully Revised, and Improved. London: W. Strahan, 1777.

[1] Story adapted by the author.

← Dressing the Table
The Titan’s Daughter →