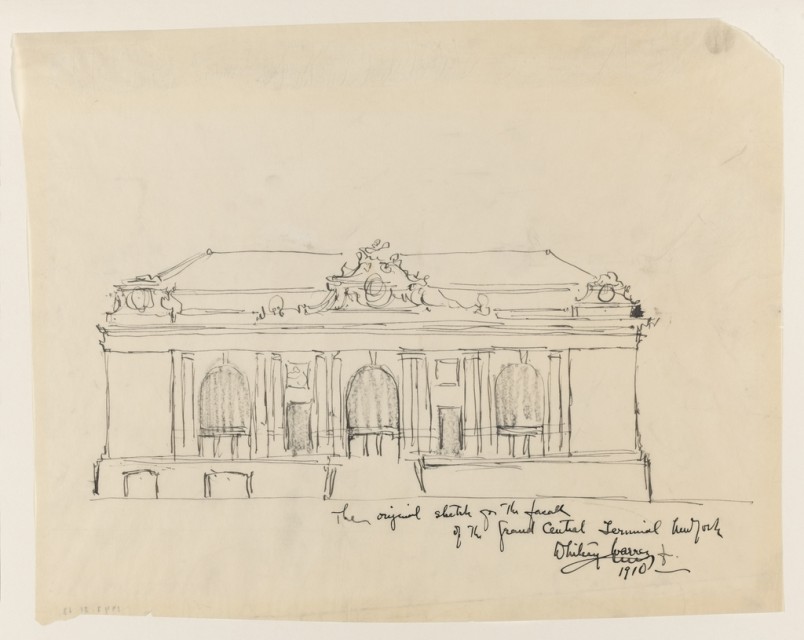 Like thousands of others, I pass through Grand Central Terminal every day on my way to work. Actually I am on a subway train passing below, but in my mind’s eye I picture the magnificent granite and limestone building looming above Park Avenue interrupting the busy boulevard. Even today it stands as an enduring temple to urban transportation, commerce and design.

Warren, the designer of Grand Central’s Beaux Arts façade, found “architectural drawing intensely absorbing and determined to be an architect” first studying at Columbia University he soon left and enrolled in the Ecole des Beaux Arts in Paris to hone his drawing and design skills. The nine year apprenticeship in the classical tradition is evident in his pen, ink and graphite sketch of Grand Central Terminal’s iconic southern façade. Evenly spaced columns and portals are crowned by sculptures of roman gods symbolizing the attributes of this new age: speed, strength and wisdom.

Perhaps one of the most used buildings in all of New York City, as many as 100,000 people pass through this transportation hub every day since it opened more than a century ago. It remains the largest railway terminal in the world.

Setting the standard for its time, the architects’ design has endured. Threatened by development Grand Central Terminal played a pivotal role in generating support for the passage of NYC’s Landmark Preservation Law in the 1960’s, which called for “civic pride in the beauty and noble accomplishments of the past.”

Today it is only fitting this Beaux Arts monument to the modern age is now a National Historic Landmark.

← Flights of Fancy
Is that really a textile? →